Here at the Digital Humanities Lab, we are called upon to photograph a wide range of objects, which means we often have to come up with creative ways to position them our lab copystands. I have recently been working on digitising a set of bound letters, for which I am using the 150MP camera in Lab 1. However, it took me while to work what the best way of setting up the volumes would be, as it became clear that the glass platform we usually use for keeping books flat for photography was not the most appropriate option in this case. For one thing, as each letter in the volumes was written separately, and later brought together into one book, any given double page spread was likely to cover two letters, rather than one. As I wanted to have each page of the letters as separate images, this made things tricky, and if I’d carried on I would have had to crop each image twice and export it twice as well. This also made the metadata that I created for this first dozen test images difficult to write as well, because almost every image contained a page each of two letters, meaning I was writing two rows of metadata for one image on CaptureOne. Another issue with the glass platform is that once I got more than a few pages in on the first volume, it started to squash the pages on the left-hand side of the book in such a way that they covered the first two or three letters of each word on the right-hand side. After all this, I decided that I needed to come up with a better way of doing things, and started again from the first page.

I knew that the pages of the book were too tightly bound to be able to lie flat unaided, so when I put them on top of the copystand, rather than under the glass platform, I tried holding down each page using a system of bone folders and weights to hold them up and in place. This works for pages made of quite thick paper and are naturally heavy, as I had found when I digitised a photo album from the university’s archive earlier in the year, but for the lightweight springy paper of the bound letters, this wasn’t as effective. As I was now moving the book for each photograph, so that only one page was in view of the camera, this method involved a lot of adjustment, and the bone folders always ended up in shot because they had to be a certain way onto the page to hold it down properly. The next method I came up with, after I had taken perhaps a hundred or so photos in this manner, was using strips of polypropylene cut from a roll. This material is normally used in museum displays for holding down pages of a book on a particular page, so I thought that it might work here. I cut two strips, one for each side of the book, put them round the page and cover vertically, and secured them at the back using paperclips so that they were taught. This was a much better solution than the bone folders, as it held the pages down almost completely flat, and all that was needed was a weight underneath the higher side of the book, which could be taken out once the pages levelled out. The downside of this method was that, like the bone folders, the polypropylene stood out in the photographs compared to the paper of the letters. Although all the writing underneath the area was perfectly readable, it was very obvious, and inconsistent with the standard methods for digitising letters. However, I was unable to come up with a different solution at that stage, so I completed the first and second volumes using this process; adjusting the length of polypropylene around each side of the book as the pages built up or decreased.

It was once I was about 20 or so pages into digitising the third volume that I stumbled across the approach that I am currently using. I was watching a recorded AHFAP (Association for Fine Art and Historical Photography) online event from 2020, which featured a talk from Jo Castle from the John Rylands Library at the University of Manchester. She was speaking about the library’s project to digitise the archive of Heinrich Simon, namely the eight books known as The Simon Papers. As these books were made up of pages and scraps of paper of all different sizes, with many flaps and pages glued in, the digitisation team came up with the idea of using nylon monofilament secured between leather weights to hold down the pages as they were photographed. This was especially good for holding down the smaller pages in the middle of larger ones. Having watched this talk and seen how effective a method it was, I was able to acquire some finishing line from our Lab Manager Gemma.

As you can see from the pictures, this has proved a success, and in the final exported images, the fishing line is barely visible, especially compared to the bone folders and polypropylene. We have already utilised this method for another project in the lab, and I hope it will continue to be a viable option for digitising tricky material in the Digital Humanities Lab. 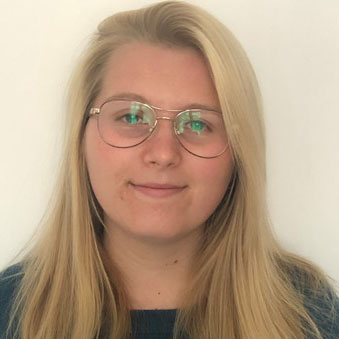 Hi, I’m Courtney and I’ve just completed my BA English degree. In my final year I have worked as an advisory intern in the DH Lab and loved every minute. In this very unusual year, I have been lucky enough to gain experience in the lab and have got to work on some very exciting projects remotely.

I first became interested in digital humanities, when taking the Rethinking Shakespeare module in my first year. On this module we had the option to create a digital edition of the ending of King Lear in TEI/XML for one of our assessments and from then on I was hooked. Over the course of this year, I have learnt more about 2D and 3D digitisation even creating my own RTI (Reflectance Transformation Imaging) set-up from home when the second lockdown hit – a testament to what can be achieved with a torch, a marble and some string. Later in the year I was finally able to get back into the lab and learn how to use our RTI dome and complete some digitisation of Northcott Theatre materials using the A0 copystand in Lab 1 too. Although the AV Lab has still evaded me.

END_OF_DOCUMENT_TOKEN_TO_BE_REPLACED

Hi, I’m Laura, a third year History and Archaeology student and this will be my second year at the Digital Humanities Lab as an intern. My interests span 2D digitisation to 3D digitisation techniques such as RTI (Reflectance Transformation Imaging) and photogrammetry. I love how these techniques are applied to cultural heritage and wider research questions within the subjects I study. For this blog post, I am going to combine my love for 3D techniques and GIS (Geographic Information Systems). In my first year at Exeter, I attended an archaeology lecture given by Prof. Leif Isaksen (Director of the DH Lab) about the dig he directed at Cluny Hill, Scotland. He passed around a printed 3D model that showcased the topography of the land. It was the first time I had seen anything like it- the fact that you could almost picture the landscape and see the contours of it despite not being physically on location excited me. In fact, it started an obsession with landscape data and my love for its link to material culture within archaeology! And another with Digital Humanities! END_OF_DOCUMENT_TOKEN_TO_BE_REPLACED